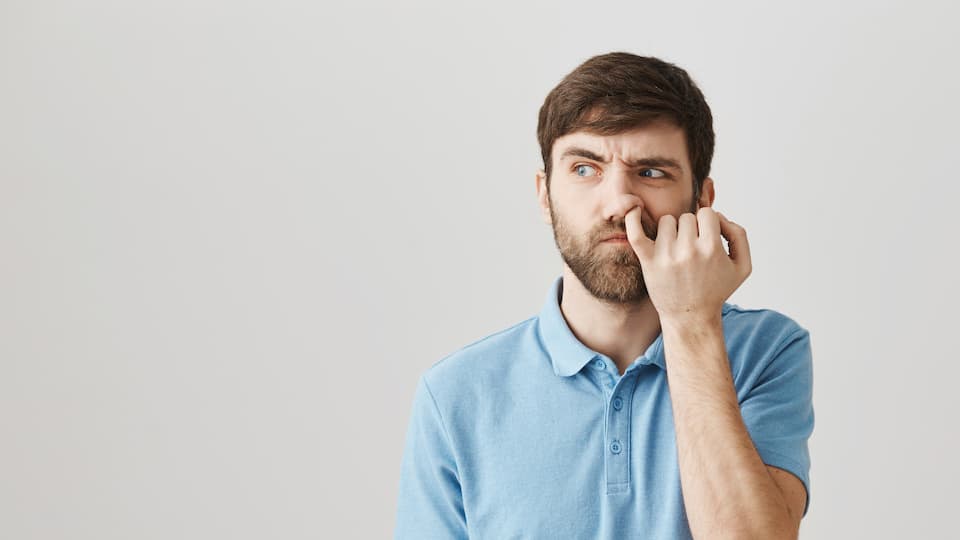 Be honest…you have picked your nose and eaten a booger, right? I mean, even if you did it once, it counts. Some people are habitual pickers, some are pickers and eaters, and some are just pickers and flingers. But is eating boogers a good thing or a bad thing? Let’s dig to find out.

Do you still struggle with the temptation to eat your boogers? Again, you are not alone. One study from the University of Wisconsin Medical School, USA found that 91% of their sampled participants were current nose pickers.

What are boogers made of, and what do they do?

Have you ever wondered what boogers really are? Truth be told, they are merely dried mucus. Mucus is a slimy, sticky substance that is also present in your lungs, gastrointestinal tract, eyes, reproductive tract, and sinuses.

Believe it or not, as gross as they seem, boogers do serve a higher purpose apart from being entertaining to pick…for some people, that is. Your nose and sinuses produce almost 0.5 gallons of mucus, when you are well, in a 24-hour period. Mucus is instrumental in keeping the nasal lining moist, helps you to smell and defends you from foreign and dangerous pathogens

Mucus forms a defensive barrier to bacteria, pollen, dust, and other contaminants that try to make their way into the nasal passage. Mucus is indeed the superhero of your nose – if it weren’t there, all the invaders would make their way into your nose and down to your lungs where they would unleash nastiness in your body. With mucus on guard, these invaders are caught red-handed.

Is eating boogers a good or a bad thing?

There are two schools of thought on this. On the one hand, you have people who say that If you eat your boogers, you are possibly putting yourself at risk of infection. According to this camp, as your body digests the booger, it can release harmful bacteria into your body. This seems to make sense.

Just the simple act of picking your nose can also cause other health issues. Scratching the inside of your nose can open up the door for dangerous bacteria. Staphylococcus aureus is located under your fingernails and can cause serious issues.

In a study, it was found that nose-pickers were way more likely to have Staph in their noses than those who didn’t pick. Staph can cause a painful abscess to form or a pus-filled pocket inside your nose or on your face. If you are a habitual picker, you can even cause damage to your septum.

There was even a reported case of a 53-year-old woman who picked a hole right through her sinus. If a sinus becomes infected, it can actually erode your skull and open the door for harmful bacteria to get to your brain.

When you pick your nose and touch other things, there is also the risk that you will spread bacteria elsewhere for others to pick up.

Those in favor of booger eating base their opinion on something called the hygiene hypothesis.  The hygiene hypothesis proposes that through exposure to microbes and illness early in life, the growing body learns the difference between substances that are harmful to the body and those that trigger asthma, a rather scary allergic reaction. Through exposure to a wide variety of allergens and infections, the immune system becomes stronger

A  small study published in Nature found that the bacteria in mucus can be used to produce an antibiotic against staph infections.

What’s remarkable about this discovery is that it’s the first time scientists have uncovered bacteria that possesses antibiotic properties and is naturally occurring within the human body. Meaning, the mucus within your nose, that eventually turns into boogers, possesses beneficial properties that we were never aware of until just a couple of years ago. In a world where antibiotic resistance is a valid concern, it’s essential to recognize the real power of the human body.

As a bonus, scientists at Harvard and MIT are now saying that boogers may be useful for our teeth too. Apparently, this great bounty of bacteria found in snot helps keep harmful bacteria from sticking to teeth. The findings in this research also suggest that snot could protect against respiratory infections, stomach ulcers, and even HIV. There is even a synthetic mucus toothpaste and chewing gum in the works. Can’t wait for that

More things about boogers you should know

The bottom line on eating boogies

Yes, mucus and boogers are a natural protective response of the body. And yes, they collect nasty dust, bacteria, viruses, and dirt before they can enter the respiratory tract. But it is also true that being exposed to some bacteria can boost the immune system.

However, there is not yet enough reliable research to support that eating mucus and boogers is a good enough thing to promote. Until that research hits the table, best to blow your nose correctly, keep your hands clean, and resist the urge to snack on your snot!